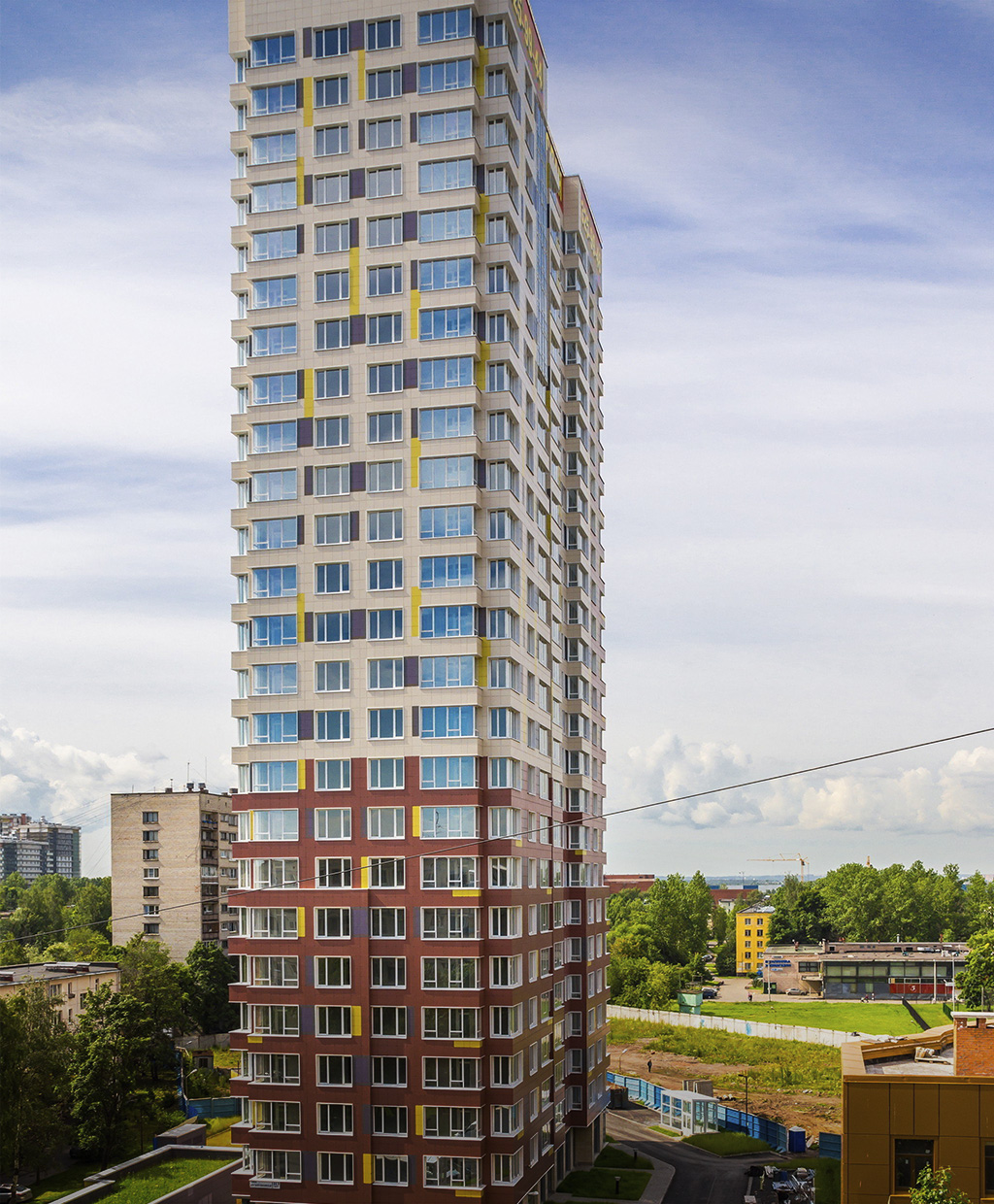 In English, «clever» means «smart», and in colloquial usage, Russian folk «clover» turns out: who wants to, that and understands.
The genre of an apartment building by definition sets a fairly narrow framework for creativity. Modular cells almost inevitably form a high prism, the shape of which is largely determined by the configuration of the site and a set of mandatory standards.

As a result, there is not much left for the architect to do: liberate the corner a little, «play» with the plinth, and finally try to mask the endless monotony of the modular facade as much as possible. Here, graphics and color come to the rescue. In this case, the authors, according to their own annotation, used the motives of the supremacists Malevich and Suetin, as well as the co-founder of neoplasticism, Piet Mondrian.
The multicolored cell of Mondrian, already widely replicated in the fashion and perfume industry, would seem to be just created for multi-storey facades. The more surprising that the architects did not pay attention to it immediately. In St. Petersburg a precedent occurred in 2009: the building of the Soviet kindergarten at 102 the embankment of the river Moyka was decorated «under Mondrian». And now high-rise new buildings of A.Len Architectural Bureau began to cover by a grid of colored rectangles.

Its Director Sergey Oreshkin does not hide, but strongly emphasizes his creative orientation to the avant-garde and related Western trends. Moreover, the Russian avant-garde has a leading position here. If the rectangular grid of Mondrian is ideally suited to the facade planes, then suprematism and constructivism are an inexhaustible source for ideas for the organization of space, and not so much concrete techniques as the principles themselves: dynamics, openness, geometric sharpness of gesture and consistent rejection of the principles of classical composition, characteristic for the projects of A.Len Architectural Bureau.

In the case of «Clover», all these qualities, as mentioned above, were not allowed by the narrow framework of the genre, and even the declared rigid grid of Mondrian in nature looks softened and «domesticated». Its color is highlighted, muted and sometimes really resembles the color of clover, which in combination with the air haze gives the 25-story giant an unobtrusive and quite friendly appearance.

In addition to the «summer» palette, the overall visual lightness of the building contributes to the profusely glazed parterre floor with narrow openings - pilasters between high display windows. There is a spacious entrance area with a concierge, as well as rooms for service and trade.

If the facade with the main entrance and the two ends are resolved as more or less free combinations of rectangles, then the fourth facade has a distinct axis of symmetry. It is marked by a vertical row of balconies with unusual decorative lintels in the form of long and narrow strips connecting different levels at arbitrary angles. These «wobbly» strips look like frosted glass from a distance, but on closer inspection they turn out to be filled with a grid and play, apparently, a purely decorative role, setting off the general rigid logic of a right angle. Such «flying sticks», freely intersecting in non-objective space, were loved by Malevich and Suetin, but here a regular «traffic lane» is allocated for their flowing stream.

In General, despite the tightness of the genre, the authors seem to have found some interesting technique, the essence of which is a game of inconsistency, where any logical series quickly comes across its own refutation. Mondrian – but not quite; Malevich and Suetin - but strictly on the axis, the highlighted center -but irregular outlines and indeterminate color; a distant hint of pilasters and natural stone in the basement – and a motley modern «designer» of the main part of the facades.

All this is surprisingly similar to the double reading of «Clover» and its mysterious connection with Mondrian, Malevich and Suetin. And together it gives the building a light relativistic imprint of postmodernism.

The new high-rise has tactfully entered the existing fabric of the Moscowsky district, finding support in the blue silhouette of «Leader Tower» business center and other modern buildings surrounding Constitution square. The house looks well from Krasnoputilovskaya street as another tower among the Soviet «ships» framing it.

Attention is drawn to the level of improvement of the surrounding area. Due to underground parking, the house has a fully pedestrian, well-landscaped area with a playground. The mirror-glazed first floor with representative rhythmic pilasters visually expands the space, facilitates the multi-storey array growing above it and adds a pleasant gloss to the new area of the environment.