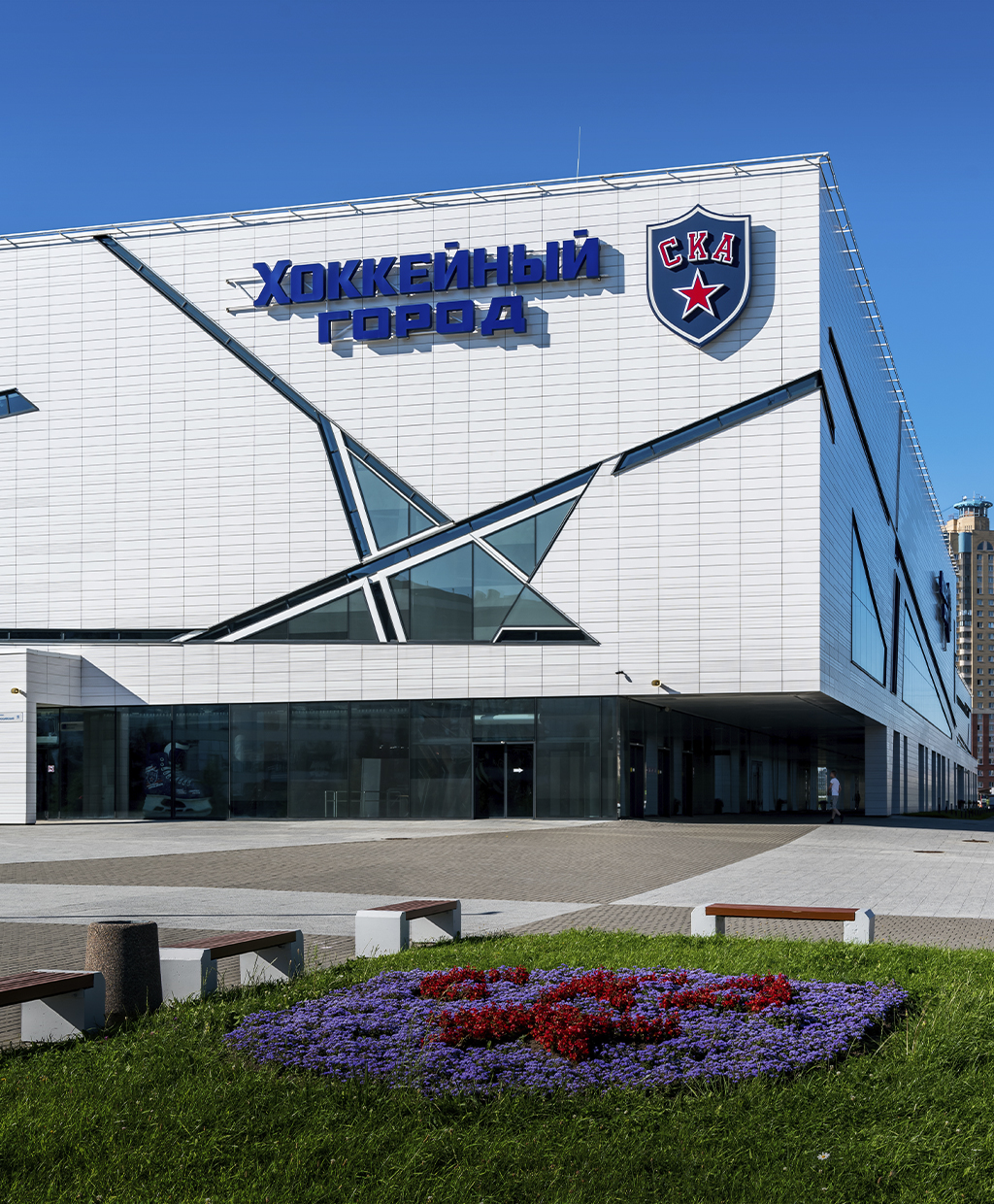 Sergei Oreshkin: ‘Initially we were fascinated by the motif of the main symbol of the game – the hockey stick – with its complex, smooth and curved geometry. The line connecting the rectangular handle ‘shaft’ to the flat lower section – the ‘hook’ – is unexpected and refined, with elements of bionics or organic architecture.

We won an international competition with this idea. In the concept, the whole 200-meter facade along Rossiysky Prospekt consisted of vertical panels twisting into an enormous spiral, resembling a horizontal skyscraper. The panels were supposed to be interactive: the color of the lighting would change depending on the status of the game and the teams playing.

Later on, the client began to ‘optimize’ the project, which, in the language of construction, means only one thing – making it cheaper. Then, after a lengthy period of reflection and drawing, a simple concomitant idea arose. A huge cube – a block of ice which had inexplicably ended up in a big city, or a snow-white iceberg which had washed ashore on Rossiysky Prospekt. On its surface were the lines left by the skates of giant hockey stars. These lines formed a web, in which the triangular windows and stained glass were woven together to resemble a star – the symbol of the club. In the spirit of constructivism, the corner of the building facing the metro was set on a console, to serve as a canopy over the main spectator entrance. A roofed trading gallery extends along the entire facade facing Rossiysky Prospekt – a modern version of the old Gostiny Dvor.

The facade is covered with ceramic panels made of natural white clay. For the materials, the bureau’s specialists travelled to China, known for its kaolin deposits. To make the surfaces glisten, we used three textures – matted, glazed mirror and rippled with fine horizontal grooves. The building has structural glass, so the aluminum frame is hidden inside, which gives it the polished effect of a high-quality piece of workmanship.

It has a rich interior. The main arena’s seating area can increase from 1,000 to 1,500 seats, making it suitable for local matches as well as concerts. The main entrance hall is decorated with the complex sculptural body of the main staircase, made from rough concrete. Critics note the complex’s stylish interiors and the reserved yet expressive black and silver color scheme.