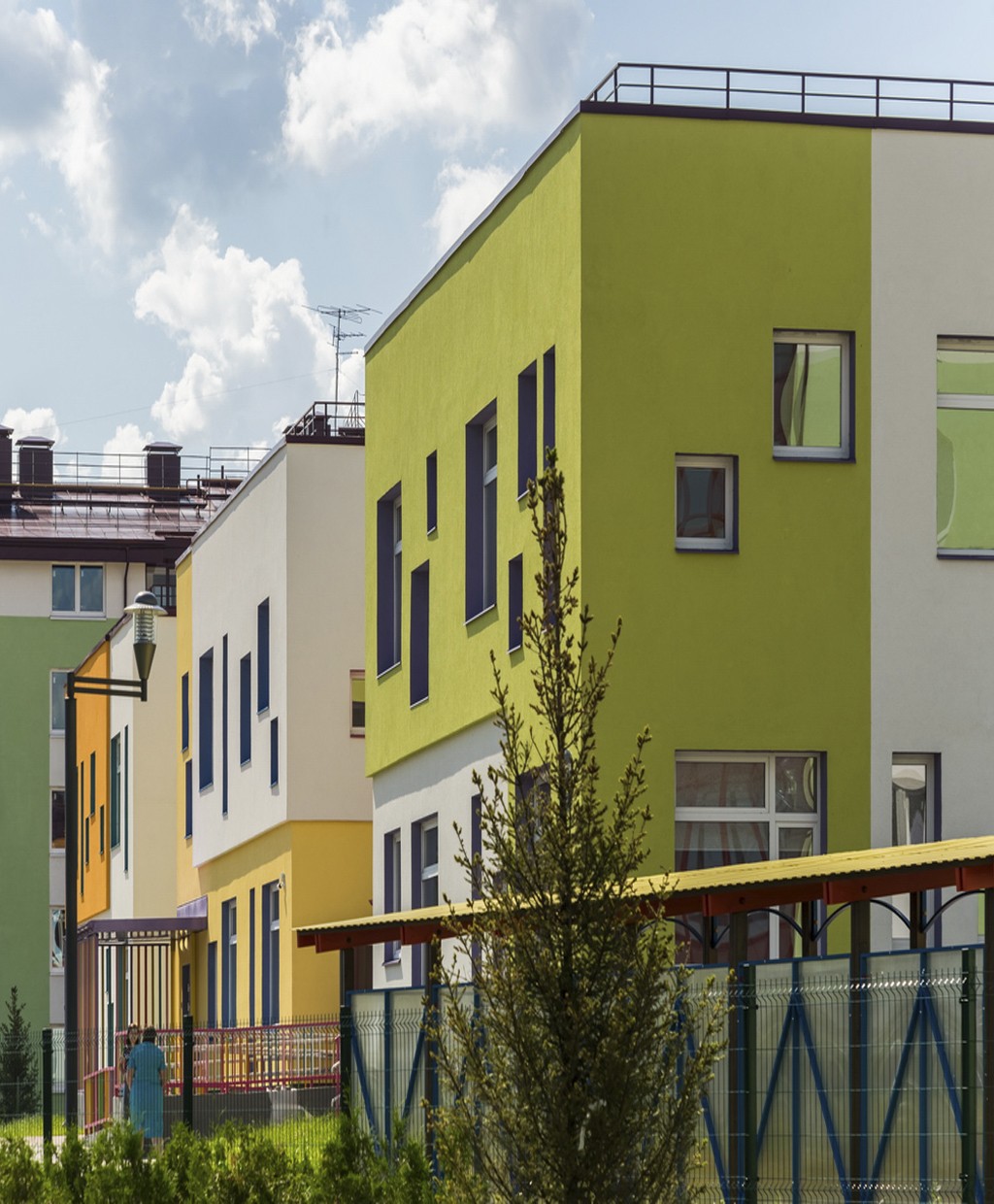 Kindergarten for 140 children in Shushary

Public kindergarten No. 47 in Pushkinsky District of St. Petersburg has been built on the territory of Obraztsovy Kvartal residential facility next to ExpoForum exhibition center on Pulkovo Heights. It is part of the complex territory development project known as Na Tsarskoselskikh Kholmakh (On Hills of Tsarskoe Selo).

A.Len Architectural Bureau managed to find a memorable look for the project and create a building not typical for a kindergarten. The institution has been designed for 140 children from one and a half to seven years of age. The building of the kindergarten has been traditionally placed in the center of the area, surrounded by five-storied buildings. The front part of the building contains public zones – a small pool, a music room, and a gym. The longer section of the building contains blocks for groups of children with their bedrooms, dining rooms, and playrooms. The blocks for children of various ages are made distinct by inserts of different bright colors.

The main feature of the building is the irregular window grid. Such a solution is not at all typical for social institutions, in which the facades are formed by the layout of premises designed in accordance with strict norms and regulations. The optimal shape of the windows has been selected to match the norms of natural insolation. Simple rectangular volumes of the building provided the necessary atmosphere and generated many associations, some for children (holes in cheese) and adults, for whom the scattered patterns of different-sized windows, for example, resembles the Notre-Dame-du-Eau chapel. This way the architecture, made understandable to children, unobtrusively introduces them to classical methods of modernism.

The second important element is the color palette. In their first versions of the sketch, A.Len Architectural Bureau offered a more saturated texture for the project, with accents in the form of bright stripes instead of monochrome colored spots. Some elements of this solution remained in the color palette of the fences around the blocks for children. Then protruding TV screen-shaped windows with contrasting frames appeared. The final version is laconic in a Mondrian way, with nothing distracting the viewer’s attention from the interchanging pattern of large and small windows.

Multi-colored facades with asymmetric windows not only produce a happy impression; they also take on somewhat more pragmatic functions: this design makes it easy for children and adults to identify their block, the entire facility has the look of a preschool institution, and its composition and proportions, imprinted in the children’s subconscious, teach children about a taste for architecture. As compared to typical houses with straight rows of windows, the kindergarten produces the impression of juxtaposition of the world of children and adults, as if comparing the life of adults with its regulated social norms and a more creative and emotional life of young children.

Thanks to Archi.ru Portal for assistance in preparing the materials.