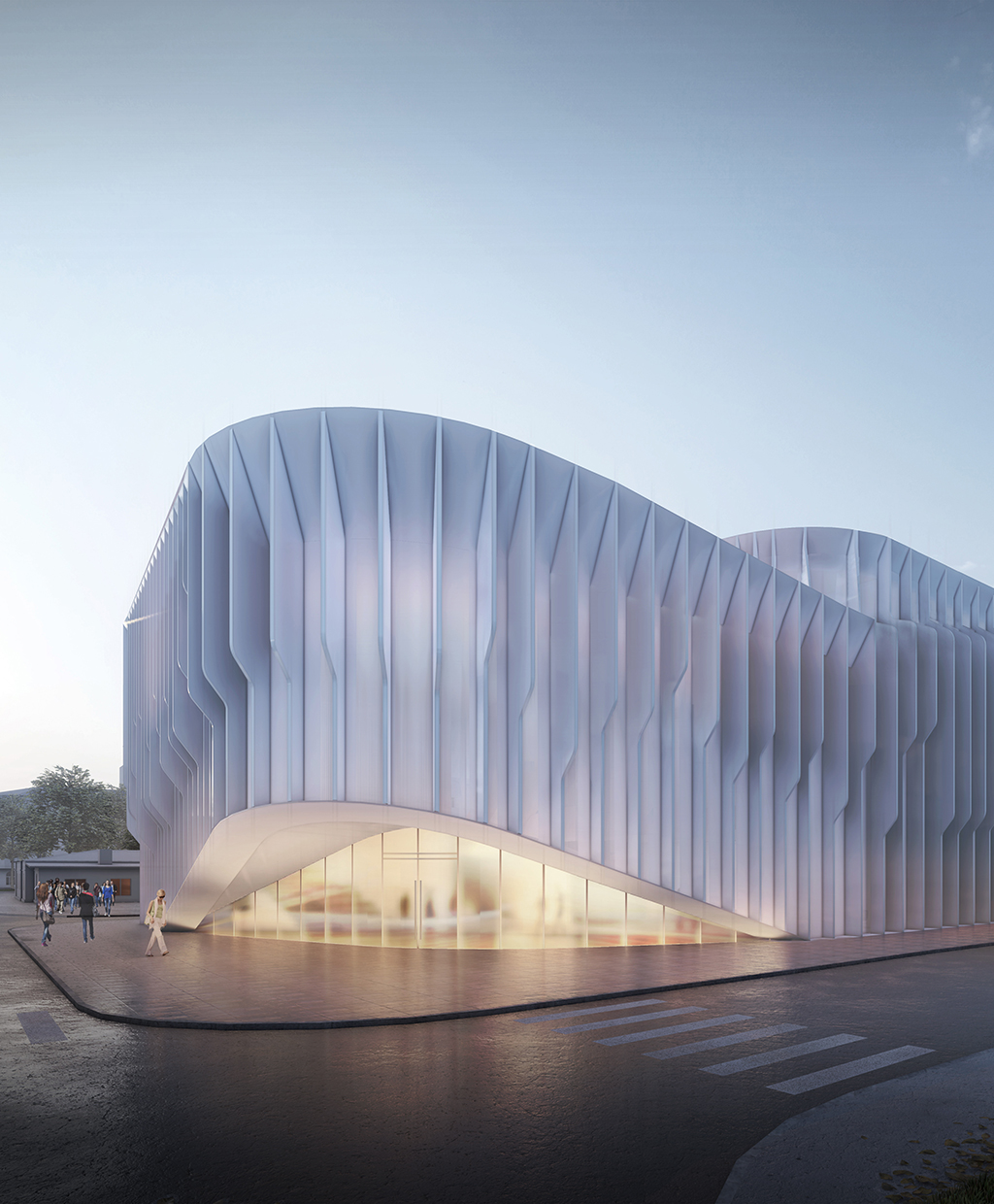 The draft design of the music school building was presented at an open architectural competition organized by the Vyborg City Administration with the goal of selecting the best concept for the School of Arts building for 600 students with subsequent improvement of the adjacent territory.

The school will feature modern equipment and new musical instruments to allow students to attend pre-service training and general development programs in the field of arts (piano, string instruments, wind and percussion instrument, and folk instrument performance, and choir).

This project attracted the attention of many first and foremost because of its convenient location in the city’s historic downtown near the famous library built by Finnish architect Alavar Aalto. Other attractive features of the project included a rare typology of the project and unique urban planning in the district of Vyborg next to the project site.

It was a complex project since the relatively small and elongated site had to accommodate a multifunctional building, and this inconvenience could not adversely affect the logistics of processes taking place in it. According to the sketch by A.Len Architectural Bureau, the school building will consist of several blocks of different heights. The academic building will occupy almost a half of the entire volume. It will have a separate entrance, and classroom windows will overlook quiet green courtyards. The central part of the building will house a concert hall, and the lobby with a complex system of stairs and levels will be located at the end nearest to the Aalto Library. The spatial organization of the space follows the functional logic: the flows of adults coming to concerts and children attending the school are separate; the stage set props are unloaded on a back street, and this process is largely concealed from the eyes of others. The lobby space will be adapted for holding various small-scale events – exhibitions, readings, and film screenings – which can be held in its multiple nooks and corners. Two amphitheaters have been arranged for classes and open air performances: one on the roof, and the other on the small square that serves as the reflection of the building in the depth of the block.

The expressive frame of the building formed by lamellae of different breadth is reminiscent of a stylized piano keyboard. The lamellae made of frosted glass are light, easy to take care of and beautiful. The lighting envisioned for the project will create the northern lights effect of shining and twinkling pearly hues. The color palette will change depending on the weather, the lighting level or the concert program.

The sketch provided by A.Len Bureau shows the complimentary harmony between the school building’s feminine look and the minimalist library building located across the road. The new project reinforces the merits of the old building and reveals new angles of the work done by Finnish architect Alvar Aalto. The buildings are not only contrasted to one another, they are also connected. The school building can be seen as the inside of the library revealed to the viewer. This comparison is made possible thanks to the most famous element of design of the Vyborg library – its undulating ceiling. The wavy facade of the school and the "corrugation" superimposed on top of it resemble a seashell, with the library in the center becoming a pearl perfect in its purity. For the subtlety of the architectural concept of the project experts have been referring to it as "Sound Waves".

Thanks to Archi.ru Portal for assistance in preparing the materials.