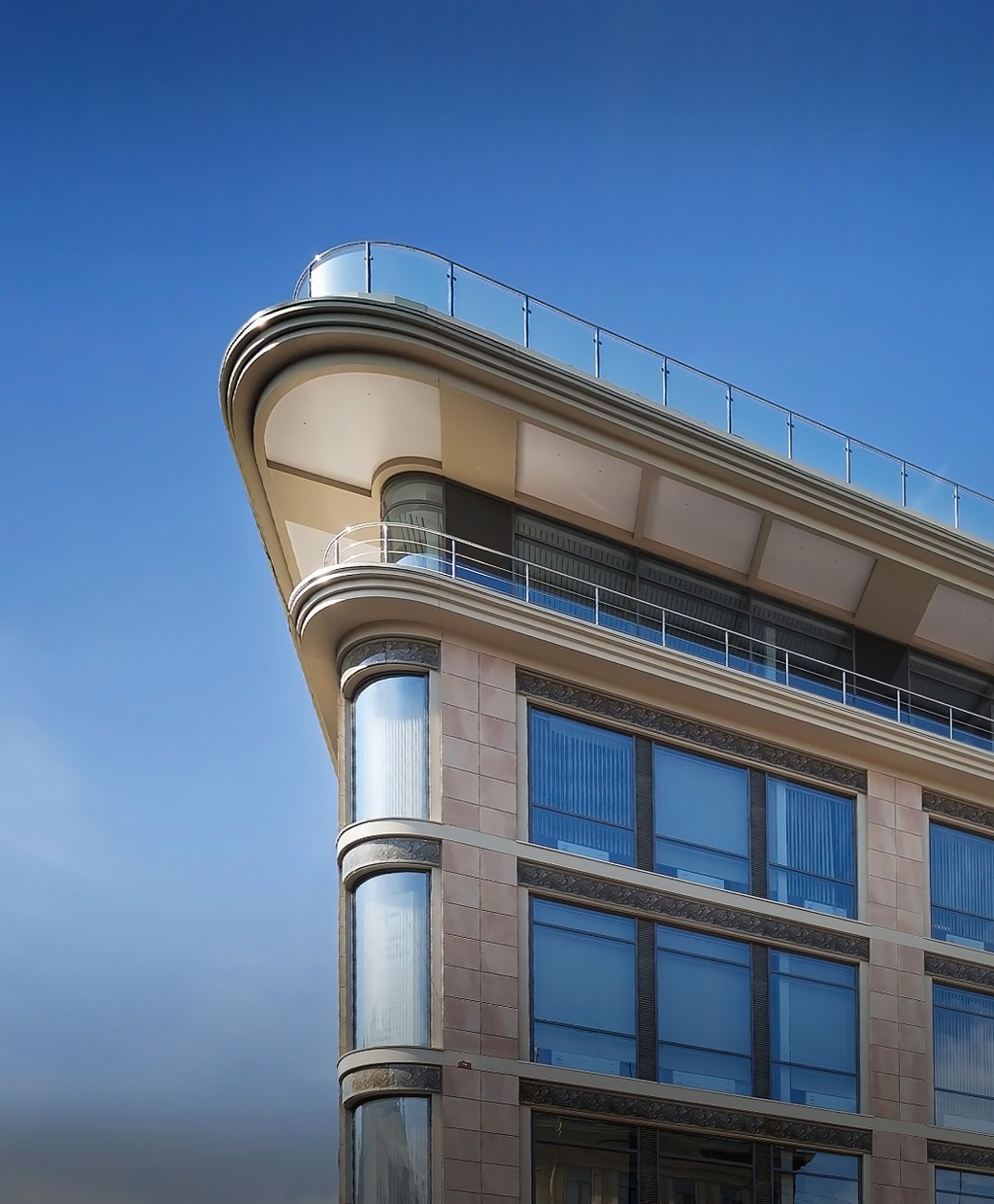 Before we joined the project, there had been numerous plans to reconstruct the Nevsky Baths building, but none had been completed. When the owner of the land contacted us, we got straight to it, making sketches which were quickly approved by the city’s chief architect, Alexander Viktorov, who knows the region and the plot very well.


We suggested the style of a large department store from the early 20th century, prime examples of which are the Trade House of the Guards’ Economic Society on Bolshaya Konyushennaya St. (DLT) and the Esders and Scheefhaal’s trading house on the corner of Moika St. and Gorokhovaya St. The characteristic features of these buildings are large glass vitrines, not only on the ground floor, with a strict axial grid on the facade and an abundance of decorative elements, with curious modernist elements of hammer-work, stained glass, and sculptural details. The idea was immediately accepted by the client and the chief architect.

Later on, however, as is often the case these days, the client vanished. We began construction on what we thought was a different project. At one of the meetings with the chief architect of Saint Petersburg Yuri Mityurev it became clear that our initial project had undergone some dramatic changes: the building was now fully glazed, the decorative elements had disappeared completely, the consoles had increased in size from 0.8 m to 3.5 m and now hung menacingly over the sidewalk. We could have found out about these changes even after construction was completed, but journalists caught wind of the project, and then so did the governor. So, we got our project back, highly perplexed by its ungainliness and the facades, as well as the construction plans – not one of the gaps between the columns and the windows was the same.

In total, almost twenty new designs had to be made until the facades took on a logical and complete look. Today, few people actually realize that the distances between the columns are different. We returned the style of the early 20th-century department store, removed the full-wall glazing and three-meter consoles, introducing new details to the facade and the ceiling lights. We were also able to use better quality materials: special panels with unique prints on the windows and the glass. The facades were finished with high-quality Italian ceramic granite, and the basement featured natural granite and rock-texture panels.

In this project, we again returned to a modern interpretation of the concept of the Saint Petersburg corner tower: a similar solution was used for the residential building on the corner of Ryleyeva and Vosstaniya streets. In the project on Marata St., the dominant corner element – the curved structure of rounded glass imported from Finland – is hidden.

The upper cornice, which extends unusually far in the eyes of many, is there for a reason. We analyzed and calculated the perspective plane of Marata St. and other central streets of Saint Petersburg with two dominant elements: vertical towers and the cornices of upper floors with prominent consoles. As there was an additional plafond, visible from below, we decorated the cornice with caissons and lamps positioned where classical molded rosettes would usually be.

We also paid considerable attention to the placement of ads on the facades, anticipating the limitations on the size of facade advertising we see today. We also managed to agree on specially-made granite paving for the sidewalks around the building, ahead of Gazprom’s similar project for the streets of downtown Saint Petersburg.

The business center’s official name is Olympic Plaza, but residents know it better as the Finnish Visa Center, which opened in the building almost as soon as the building was entered into operation.

It is important to mention the sincere gratitude of the client, who saw the result of the work and the positive feedback from both residents of the city and professionals, who noted the references to art deco and department stores, the color palette and the facade details.

About the location: the corner of Marata and Stremyannaya

Stremyannaya Street resembles the Palace staff district where grooms, cooks, tailors and palace lackeys lived. People had another name for the street – Vedernaya (Bucket Street) – because of the local public houses which sold vodka in buckets. In the late 19th century, Stremyannaya St. and the surrounding area had the reputation of one of the worst places in the city. There were two public houses, four taverns, six porter (beer) shops and three wine cellars. Marata St. itself was known as Gryaznaya (Dirty) St. for a long time – in Pushkin’s time the street lay on the outskirts of the city. The street got its present name in 1918 in honor of the French revolutionary Jean-Paul Marat.

This area has connections with many famous residents of the city. In a curious coincidence, nextdoor, on Razyezzhaya St., lived David Ivanovich de Boudry, Marat’s brother, who taught French in the Tsarskoe Selo Lyceum. House No. 3 on Marata St. is famous because on the other side of the road, Fedor Dostoyevsky was hit on the back of the head by a drunk peasant. The peasant was later unable to explain why he had done that to the famous writer. The writer Mikhail Slonimsky spent several years of his life in a communal apartment in the same building. Many famous literary figures of the time visited him here, including Yevgeny Schwarz, Korney Chukovsky, Mikhail Zoschenko and Leonid Dobychin. In 1914, house No. 9, to the left of the site, became the home of the engineer Dmitry Shostakovich and his family, including his son Dmitry– the future composer, who lived here for twenty years.

Olympic Business Center was the fourth building to be built on the land over the last 200 years. In the early 19th century, there stood a two-storied wooden house with a tavern and an inn. It was later replaced by the Church of the Most Holy Trinity of the Society for the Promotion of Religious and Moral Education. The architecture expert Valentin Kurbatov wrote that this church was ‘a modern-day construction horror story’, although opinions on the matter differed. The building of the Nevsky Baths, built in the then-fashionable ‘brutalist’ style, appeared on that spot after the church was demolished in 1977.